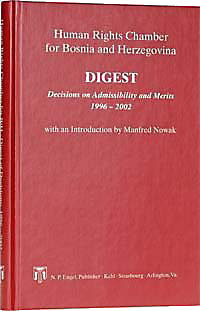 with an Introduction by Manfred Nowak

Students providing proof of their status benefit from a 50 percent reduction.

The Digest lists the cases in numerical order and contains a short summary of the facts, the main issues on admissibility and merits as well as the respective remedy ordered. If appropriate, it also contains interim measures, decisions on request for review and, if accepted, on review as well as special decisions on further remedies.

A numerical and alphabetical list of all cases, as well as a subject index and an article index enable the reader to quickly find the relevant judgments and their main holdings. The full text of these judgments is available from the website of the Chamber.

• Introduction by Manfred Nowak, Member of the Chamber (1996-2003)
Focus on the background, mandate, practice and gradual dissolution of the Chamber.

The Human Rights Agreement in Annex 6 of the Dayton Peace Agreement for Bosnia and Herzegovina (BiH), signed in December 1995, obliges the three Bosnian parties (the State of BiH, the Bosniac-Croat Federation of BiH, and the Republika Srpska) to ensure the highest Ievel of internationally recognised human rights, as laid down in the European Convention on Human Rights and 15 further international and European human rights treaties. In order to fulfil these obligations, a special Human Rights Commission, consisting of a Human Rights Ombudsperson and the Human Rights Chamber, had been established in early 1996 as a national human rights institution for BiH within the meaning of the Paris Principles.

• The Human Rights Chamber for Bosnia and Herzegovina (14 judges)

A mixed Bosnian/international institution, constituted in 1996, and dissolved in 2003. The majority of the judges of the Chamber (eight out of fourteen), including the President (Michèle Picard, France), were elected by the Committee of Ministers of the Council of Europe. The remaining six judges were appointed by the Bosnian parties.

The judgments address a broad variety of human rights issues, which reflect the reality in the postconflict situation of BiH.

– discrimination against ethnic and religious minorities

– returnees’ rights, such as the rights to work, fair trial, personal liberty and security, freedom of movement, freedom of religion, social security, pension rights, private and family life, and the protection of their home and possessions

Other important cases relate to

– the death penalty, arbitrary detention, torture and inhuman treatment, forced labour, enforced disappearances, expulsion and extradition, freedom of expression, religion and association, the right to a fair trial before independent and impartial courts, the right to education, as well as various economic issues arising from the freezing of foreign currency savings, the privatisation of socially owned companies or the non-enforcement of monetary judgments against the government on grounds of the difficult public budgetary situation.